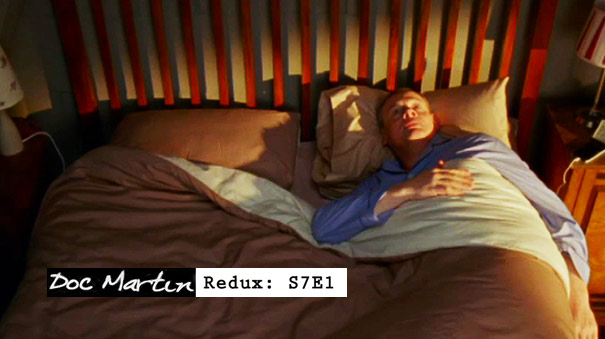 Enjoy our look back at the first episode of Doc Martin Season 7 but, beware, there are numerous spoilers ahead. You can watch Doc Martin S7E1 here first through to December 24, 2015.

When we last left Dr. Martin Ellingham, his crust had been badly singed as Louisa left Portwenn to take a break from their faltering marriage. After an anxious, almost two-year wait (in real time, not TV time), Season 7 opens up with a very dour Doc checking his phone’s empty message list and methodically starting his day as he’s jeered at by the local teen contingent while stamping his way down the road. 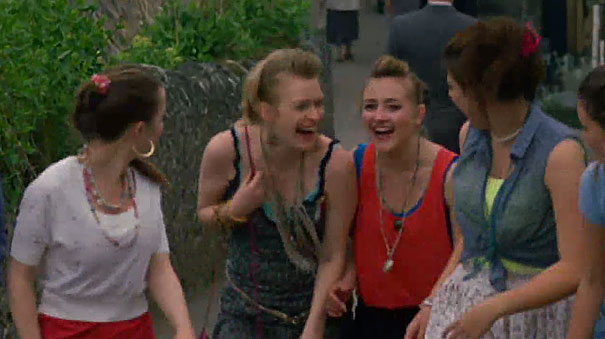 It would almost make us feel sorry for the grump, if he hadn’t made the bed of misery he’s currently laying in.

Where is the Doc heading to with such purpose in his step? To see the person he always turns to in times of distress and the only one he’ll put up with admonishment from, his Aunt Ruth. Is the Doc really admitting to her that he needs to see a therapist? He knows he needs to quell some of his quirks if he’s to have any chance of winning Louisa back.

It makes complete sense that Martin would ask Ruth for professional therapy. He casually does so all the time. You see, Martin has been in contact with Louisa just once in the three weeks she’s been gone and blames it on poor cellular service at where she’s staying in Spain. However, Ruth blames this lack of contact on something, or really someone else entirely, and we all know that someone wears a suit and a scowl. Ruth wisely refuses to put Martin on her couch but knows of another professional in the area who would be exceptionally qualified to treat him, the talented and apparently equally (Insert ominous “Jaws” theme here.) stodgy, Dr. Rachel Timoney. Martin reluctantly agrees to make an appointment. 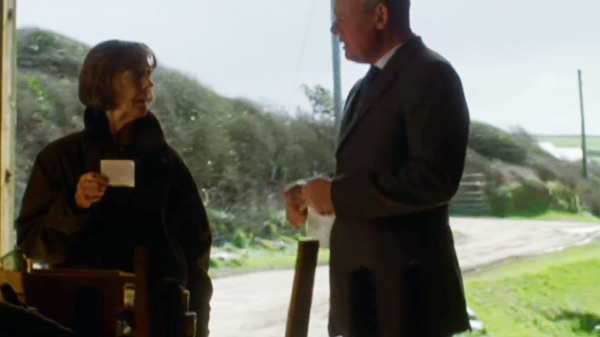 “You know, people say you haven’t changed a bit but, in your case, it’s literally true. Just look at that tie.” – Ruth (while looking at a childhood pic of Martin at the beach)

Whether stepping on the sharp corner of one of James’ toy blocks, or sleepily falling down the stairs, Martin is continuously, sharply reminded of the pain of missing Louisa. It’s easy to see how lost he is without her when he’s alone, leaving her an awkward voice mail, or smashing the phone over the frustration of a bad connection. If they could just connect when they could actually hear each other, maybe he would hear Louisa, really hear her, for the first time. 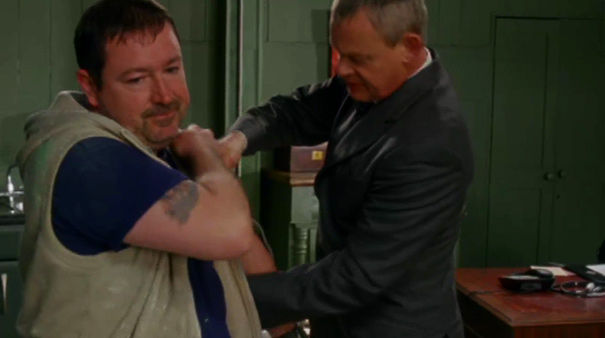 There’s also the tricky matter of wayward construction boss Steve Baker (Daniel Ryan) that causes the Doc some distraction. Slacking off from getting renos done on Al Large’s soon-to-be fishing lodge, Steve is more focused on keeping his glory days as a nautical rescue hero alive. He tries unsuccessfully to convince Martin to certify his medical exam papers so that he can participate in a mock lifeboat rescue in the harbour. The exercise is to be televised, commemorating the anniversary of the real “Moon Ray Rescue” that gave Steve his local hero status some years back. When Martin demands a urine sample or no signature, time is of the essence and Steve tries to pull the ol’ sample switcheroo, suddenly appearing with a specimen that we, and the Doc, later discover actually belongs to Steve’s daft assistant, Barry. Ur…ine…trouble Steve! It turns out that Barry’s in another kind of trouble as his boss unwittingly helps him find out he may have testicular cancer and causes Martin to miss his first counselling session. We haven’t met Dr. Timoney yet at this point but we’re certain she’ll be less than pleased to re-schedule. 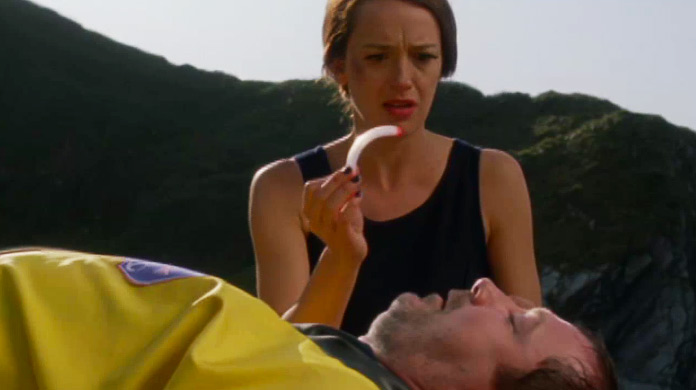 Steve, with signed papers, finds himself in the middle of the mock rescue action with Martin’s receptionist Morwenna and her friend Janice (Robyn Addison) as the intended victims. Steve falls asleep at the wheel as he’s driving the boat, leaving Morwenna and Janice actual victims as the boat speeds toward a deserted piece of shoreline. The ensuing crash landing leaves the girls relatively unscathed but Steve is still unconscious and his leg is broken. That’s when the normally slightly dippy Morwenna is galvanized into action. She contacts Martin over a crackly radio for help and manages to properly insert a breathing tube down Steve’s throat, all while Janice uselessly freaks out. Give that girl a raise, Doc!

Martin reaches the castaways in time to re-set Steve’s leg and determine that he’s had a minor stroke brought on by a performance enhancing drug cocktail he’s been gobbling down to stay running with the younger pack. Safely back at the village waterfront, Steve finally gets his moment in front of the cameras but it’s while he’s laid flat on a stretcher in embarrassment. 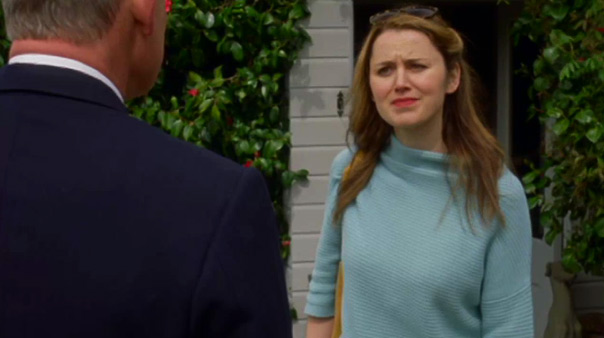 Then, Martin races to his re-scheduled appointment with Dr. Timoney (Emily Bevan) to find her just about to exit, as he’s 25 minutes late. It quickly becomes obvious that Martin has met his match in the abrupt and demanding department, and he’s forced to surrender his mobile during his first session in Dr. Timoney’s cell-phone-free-zone office.

As Dr. Timoney lays down the law and Martin’s phone lies in a basket around the corner, we see that another missed connection for Martin and Louisa is sadly occurring. Hopefully, they’ll get to actually make one in the next episode and we’ll all get to breathe a sigh of pain relief for the doleful Doc.